“Football for Sale” What is the problem, and what are the solutions? 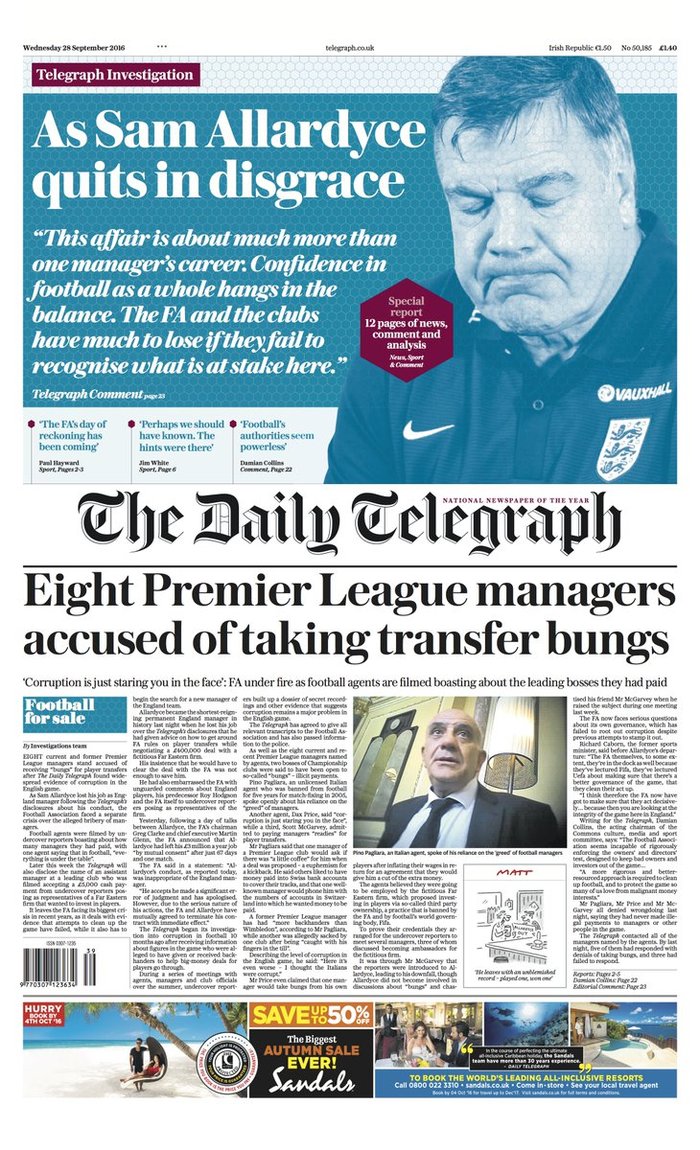 Over 10 years ago the BBC broadcast a Panorama programme with the tantalising title "Undercover: Football's Dirty Secrets". It featured allegations about rule breaking and “bungs” about (amongst others) the then Bolton Wanderers manager, Sam Allardyce, and Portsmouth manager Harry Redknapp. A centrepiece of the programmes was a secret film recording of a football agent called Charles Collymore caught on camera saying "There's managers out there who take bungs all day long. I would say to you comfortably there's six to eight managers we could definitely approach and they'd be up for this no problem."

I represented, and cleared, Mr Collymore in disciplinary proceedings brought against him and others by The FA arising out of the programme. We watched the entire unedited secret film recordings. It was obvious that Mr Collymore had gone out of his way on several occasion to make clear the way he did business was by identifying and putting in the hours with young talented players. But those secretly filming him over a series of dinners and meetings did not give up. They kept pressing him, saying that their investors wanted a short cut and asking why they couldn’t just pay a manager to buy players instead. Finally, after many, many hours, they got the sound bite they wanted for the programme.

Mr Collymore later said he had become suspicious of those filming him and he was trying to “smoke them out”. The FA, embarrassed by the headlines of corruption and bungs in football promptly decided to fail to investigate any of the serious allegations made in the programme, passing that buck to others, but instead to throw the book at a few of the smaller players mentioned including Mr Collymore, charging them with breaches relating to a relatively low level transfer of a player from Luton Town to Bristol City.

10 years later many people feel a sense of “déjà vu”. More secret film recordings apparently trying to set up football managers and others (with some of the same characters involved), more embarrassment for The FA, but an underlying sense that nothing much has actually been exposed and nothing much will ever change.

Why is this, and what can be learned?

First, we should be sceptical about the kind of entrapment deployed by an industry that has only recently recovered from its own scandal of illegal phone hacking of celebrities and others to sell newspapers. The public only see the selected highlights of these “stings” – the moment the victim of the entrapment appears to take the bait that has been dangled in front of him over many meetings. Devoid of context it’s difficult to reach any rational conclusion – but that is not the purpose. The purpose is to shock and sell newspapers. Just like the recent setting up of MP Keith Vaz by “rent boys” paid by a national tabloid, it’s not the public interest in exposing corruption or crime that motivates these stings but the commercial interest of creating a scandal to sell more copy.

The recent Daily Telegraph “exposures” are a case in point. Without discussing the detail of any of them for obvious reasons, the reaction to them is telling. At first there was a real sense of shock and anticipation. More serious exposures were to come involving a number of current and former Premier League managers. But then, a week later, it seemed the paper hadn’t really got much at all. Many of the allegations came from a person banned from being a football agent in Italy for match-fixing who now himself said he made the allegations up. Many of the secret recordings featured people discussing things, no doubt after encouragement, that might amount or might not amount to a breach of The FA Rules if they were followed through all the way, but were just discussions. Some of the allegations, if you consider them, involve no breaches or potential breaches of the rules at all, but because money is spoken about or offered they are presented in such a way as to suggest something more sinister might be going on.

The FA and many of the individuals and clubs mentioned in the allegations have requested full disclosure of all the material, so that proper investigations and (if appropriate) disciplinary proceedings or defences can be mounted. The Telegraph has so far refused to co-operate – demonstrating that the suggestion that any of this is genuinely done to help uncover corruption and not just to sell papers is far from the truth.

We have yet to see what the final fallout from this affair will be. But although we should be sceptical about this kind of entrapment and the “sexed-up” allegations it has packaged, there is a genuine lack of public confidence in the administration of football. There are unprecedented amounts of money passing around within the game with little effective regulation. Many people point the blame at supposedly “dodgy” football agents, “greedy” players or the odd “bad apple” football manager; but the truth is inevitably more complex. Top football clubs, competing for the best players so as to retain or advance their position, will often do just about whatever they think they can get away with to sign the player they want. A culture of business is encouraged that encourages a level of corruption. The only way to deal with it is through effective, transparent and, I suggest, independent regulation.

Yet regulation has, if anything, gone backwards in the last few years. The international body ultimately responsible for the regulation of the game, including player transfers, third party investment, agents and so on, FIFA, has itself become mired in serious scandals about its own corruption in the administration of the sport that it has lost both the credibility and the will to effectively regulate the industry.

The regulation of football agents is a case in point. Last year FIFA decided, ostensibly because it was unable to regulate many unlicensed agents in certain parts of the world, that rather than tightening up regulation of agents it would de-regulate. There would no longer be a requirement for football agents to be licensed. Rather a more “soft-licensing” scheme of “Intermediaries” Regulations would be put in its place allowing national federations to set up their own systems or little systems at all. Important safeguards for players, such as the rule that a Representation Agreement with an agent could only continue for 2 years (unless renewed by both parties) were scrapped.

At the same time as de-regulating agents, FIFA decided to put in place a world wide ban on Third Party Investment (‘TPI’) in football players. Previously, and quite properly, Third Party Influence was banned, but many parts of the world allowed third parties to invest in the future transfer value of a player thus allowing poorer clubs to borrow money and arguably players from poorer countries or backgrounds to be promoted on a bigger stage. Opponents of Third Party Investment compared the scheme to human trafficking, perhaps forgetting that if a Third Party doesn’t have an interest in a player then only the club, his employer, does – having even more control over the transfers and future moves of the player.

But whatever the arguments, FIFA chose to simply prohibit TPI outright rather than setting up a transparent system of regulation of it. Some of us suggested at the time that the inevitable consequence of these twin moves (de-regulating agents and banning TPI) would be to drive practices underground and outside a regulatory framework. In my March 2015 paper “The new FA Intermediaries Regulations & Disputes Likely to Arise”  I forecast the de-regulation of agents would cause more, not less, conflicts to arise, as well as more allegations of corruption. Personal experience of the expediential increase in the number of disputes, particularly FA “Rule K” arbitrations between various agents, or agents and clubs/players, has borne this out.

Whilst The FA in England has adopted a more hands-on approach to the regulation of agents than many of its counterparts, the regulations are still lacking in certain areas (discussed in my paper). Ironically to some, it has actually been the football agents themselves who have been calling for better and more transparent regulation. Both the English Association of Football Agents and the European association have been lobbying national FAs to support the introduction of some type of “kite-mark” licensing programme, with proper training, examination and regulation of those entering the profession of agent. These are really the minimum standards any national association should be embracing if it is serious about cleaning up football rather than just responding to the latest headline.

But it is not just the substance of the regulations that is important but also the nature of the regulator. Like most other sports, football has too long regulated itself. At the top of the regulatory pyramid, FIFA has incorporated statutes under which national football authorities can be expelled for going to national courts instead of determining their disputes within the FIFA structures. In England, the FA, that is the body consisting of all the Participants in the game (with varying degrees of representation on its governing bodies)  both make the rules and then investigates and prosecutes alleged breaches of them. The independent FA panels that then hear the disciplinary prosecutions are picked by The FA and rely on The FA’s staff and facilities for just about every part of the disciplinary process. And at the same time as issuing press releases about taking corruption more seriously, The FA has, over the past year or so, been going through an extensive cost-cutting and re-organisation programme that has decimated its team of lawyers and others dealing with investigation and prosecuting breaches of the regulations.

If there is one positive thing that could emerge from the recent scandal it would be the establishment of an independent regulator of football. The FA should still make the regulations, but the investigation and prosecution of breaches, could be passed to an independent third party given the proper resources to regulate football by a football tax on revenue from TV monies.

A properly independent judicial system with a transparent appointments process (whilst maintaining the useful representation of members from a player and club background as well as lawyers) could determine the disciplinary allegations. This would have the dual advantage of restoring integrity into what is viewed by many today as a flawed process and also providing the new independent body with greater powers backed by the Courts. As I argued in another recent paper (Compelled Consent – Pechstein & The Dichotomy and Future of Sports Arbitration - Compelled Consent) if the disciplinary process is provided with the features of an arbitration (principally impartiality and allowing for a proper judicial process), which it currently lacks, it in turn would be able to turn to the courts to make orders in its favour under the Arbitration Act – for example forcing the disclosure of material or the attendance of witnesses.

Without these sort of reforms we can expect to read more revelations about football in another 10 years and listen to the more lamenting about the disgrace of the national game.

Nick De Marco is a leading barrister practising in all aspects of sports law and in football disputes in particular. He is co-Author if the recently published Bloomsbury Professional Law series title, “Challenging Sports Governing Bodies ”. The opinions expressed in this article are entirely his own and do not necessarily reflect those of any of his clients.